We spoke to Dr. Sacks to learn more about his presentation at CIRSE 2022.

Watch his lecture in the session, “Fundamentals in stroke management.”

Endovascular thrombectomy (EVT) for acute large vessel ischaemic stroke has progressed from prolonged intra-arterial thrombolytic infusions to mechanical devices to remove the clot.  The original corkscrew like Concentric Merci device has been replaced with stentrievers (SR) and contact aspiration (CA) devices which may be used as single devices or combined [1] (Figure 1), and the devices are delivered through guide catheters or balloon guide catheters (BGC).

For anterior circulation strokes, the ASTER randomised trial compared CA versus SR and found similar rates of revascularisation > 50% (mTICI > 2b 85% vs 83%) and mRS 0-2 (45% vs 50%).  CA was seven minutes faster but more frequently needed rescue therapy (33% vs 24%) [2] (Figure 2). The COMPASS randomised trial of CA versus SR found nearly identical rates of revascularisation and good clinical outcome, but CA was ten minutes faster with a device cost saving of $5000 per case [3] (Figure 3).  A meta-analysis of observational studies for posterior circulation strokes found that CA was superior to SR for success and completeness of revascularisation, good clinical outcomes, and mortality, and was 29 minutes faster, but the studies included in the analysis were of limited quality [4].  Real world experience from registries comparing CA and SR has confirmed similar rates of successful revascularisation and clinical outcomes [5,6].

Balloon guide catheters have been advocated because they provide flow arrest and possibly reversal, and may reduce clot fragmentation and distal emboli, but they may be harder and more time consuming to advance, and add expense.  The benefits of BGC were confirmed in a meta-analysis that mostly used SR, with better and more complete revascularisation, better functional outcomes, and lower mortality [9] (Figure 5).  The benefits of BGC are independent of whether CA or SR is used [10], even if large diameter (.070) aspiration catheters are used [11].  The benefits of BGC are larger than the effect of thrombectomy versus control in the MR CLEAN trial [12].

However, these comparisons may become obsolete as devices improve.  A beveled aspiration tip has better first pass effectiveness than a flat tip [13].  Lumenal diameter of aspiration catheters have increased and new .088 lumen catheters achieve first pass eTICI > 2b of 80% and eTICI 2c/3 of 55% with a final eTICI > 2b of 96% [14].

In conclusion, results of CA and SR are very similar, except for perhaps in the posterior circulation.  Combined use of CA and SR seems better than CA or SR technically, but clinical outcomes may be similar.  The use of a BGC improves technical and clinical outcomes regardless of thrombectomy device used.  While devices continue to improve, the best device may be the one you are most skilled using.  Success and speed trump device costs. 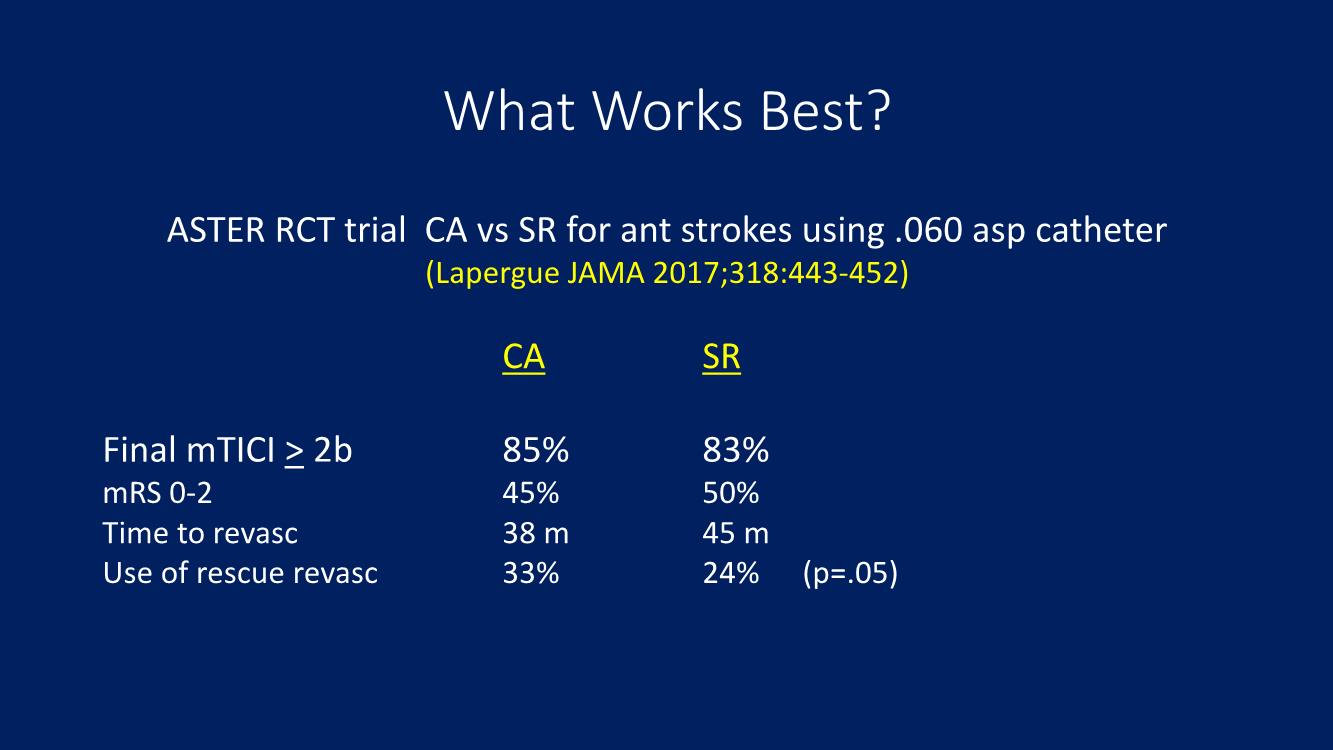 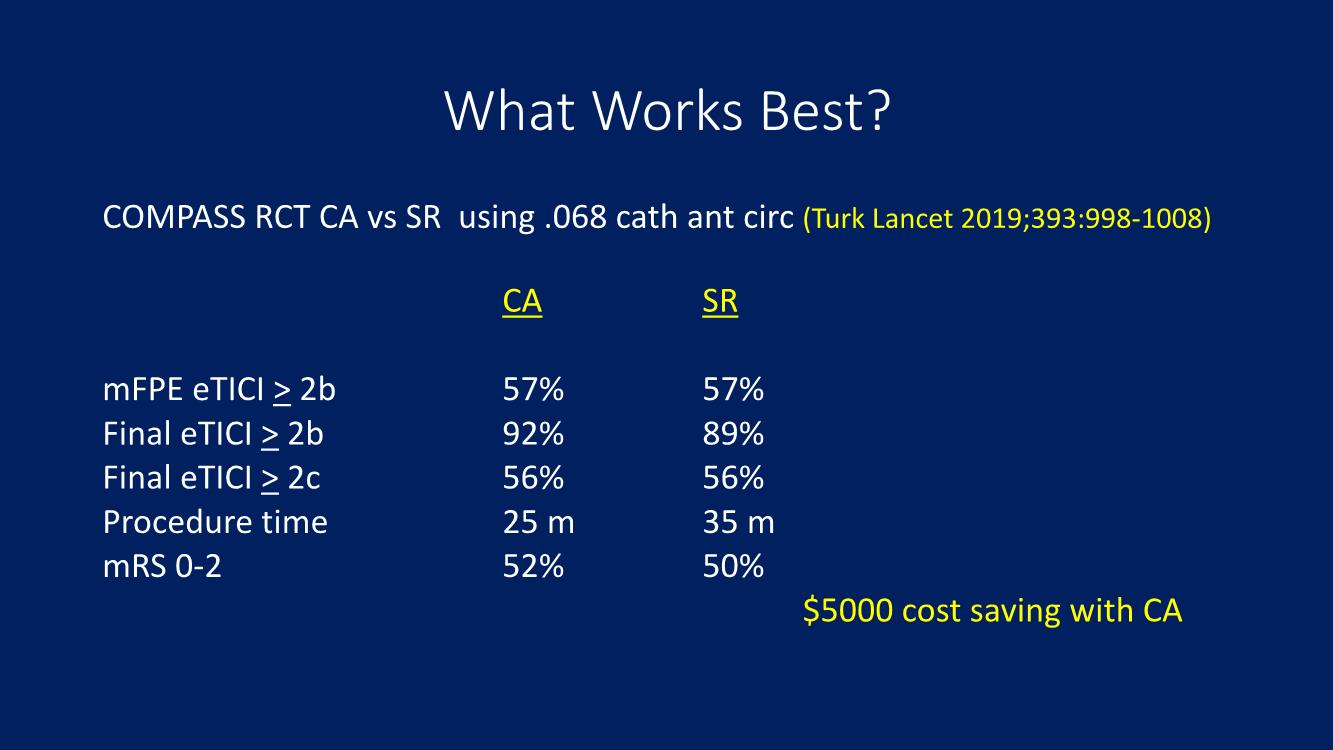 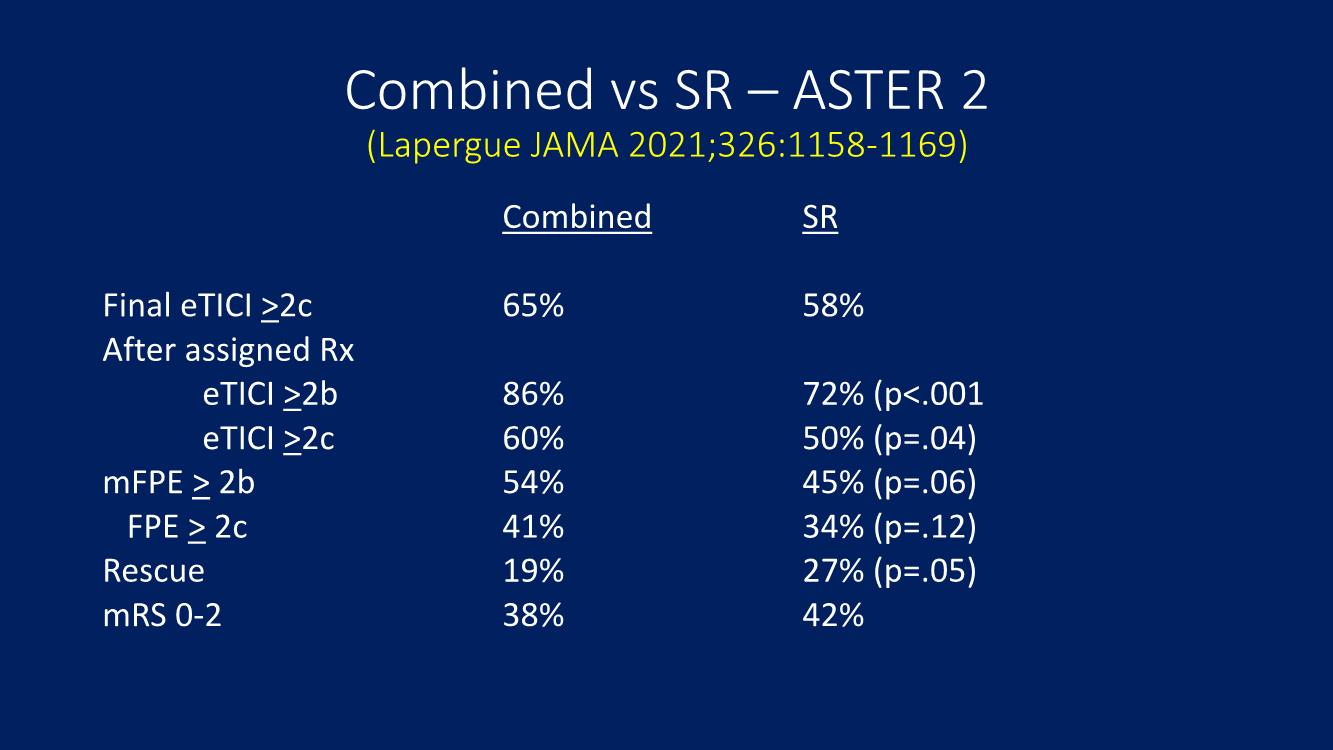 Figure 4: ASTER 2 randomized trial comparing the combined use of CA and SR vs SR alone. 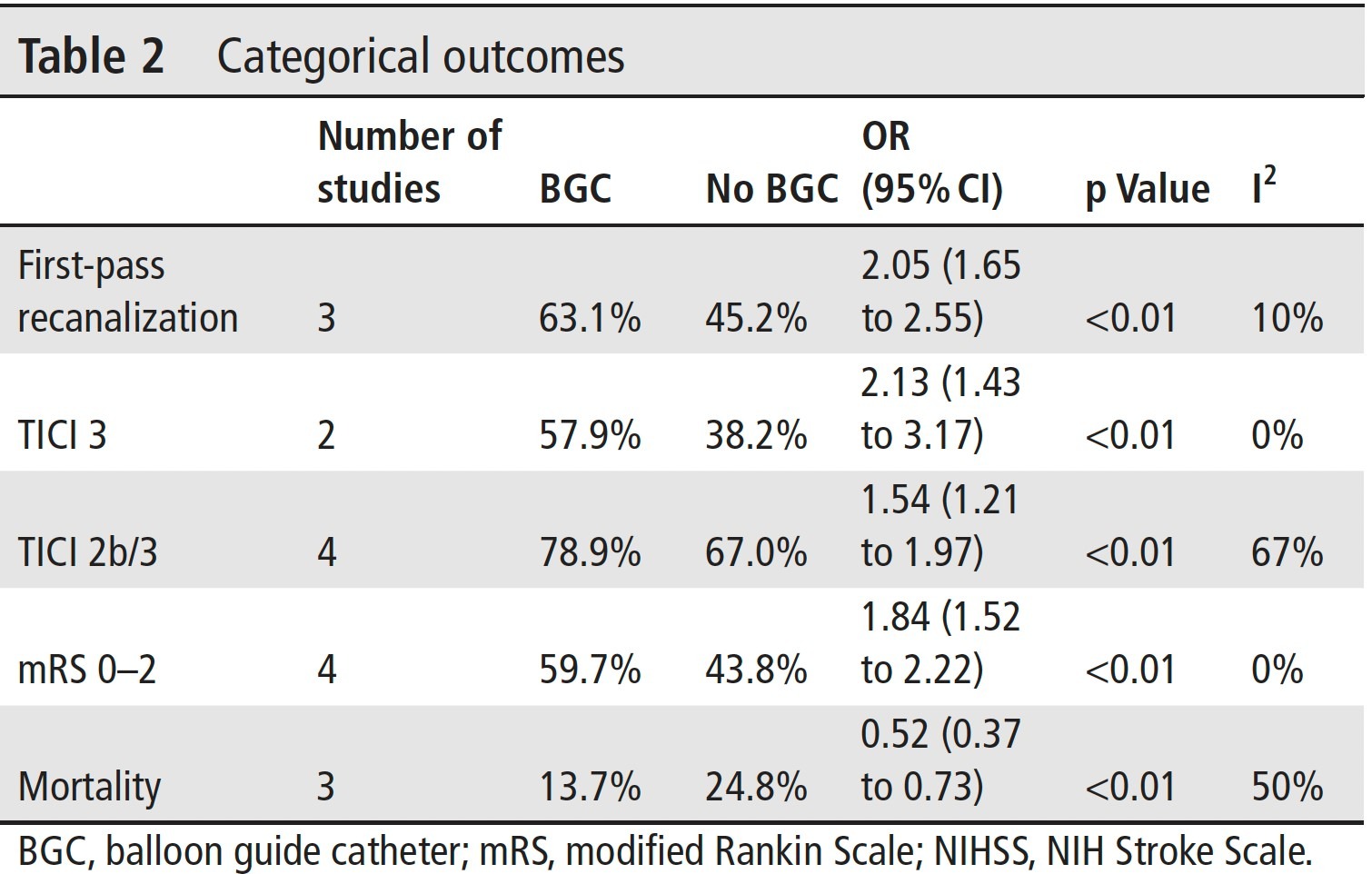 Dr. David Sacks received his undergraduate degree in chemistry from Princeton University, his medical degree from the University of Pennsylvania, and completed his residency in diagnostic radiology and fellowship in interventional radiology at the University of Pennsylvania. He has been an interventional radiologist at Reading Hospital since 1985. He has served as chair of the Technology Assessment Committee, Councilor for the Standards Division and President of the Society of Interventional Radiology. He received a gold medal from the Society of Interventional Radiology in 2021. Dr. Sacks has authored/coauthored over 130 scientific publications and book chapters. He has been the site principal investigator for multi-institutional trials of treatment of deep vein thrombosis, vertebral compression fractures and peripheral arterial angioplasty. He has had an interest in the interventional treatment of stroke for nearly 20 years. He has authored or co-authored numerous papers on physician training and performance standards for carotid stenting and stroke interventions, and chaired an international writing group to create outcome benchmarks for intra-arterial stroke therapy. He is past president of the Intersocietal Commission for the Accreditation of Carotid Stenting Facilities and serves as immediate past chair of the board of the Intersocietal Accreditation Commission. He has served on the board of the interventional stroke registry, INSTOR. He was co-chair of the Society of Interventional Radiology CLOTS interventional stroke training course, and created a stroke training course for the Interventional Radiology Society of Australasia in July 2017. He lectured on stroke interventions in New Zealand in 2019 at the Australia-New Zealand College of Radiology annual meeting. He is committed to the education of physicians, nurses, and technologists offering interventional stroke care.