We caught up with Dr. Abadal to learn more about his presentation at CIRSE 2022.

Catch his lecture during the session, “Pancreatic cancer management.”

Pancreatic duct adenocarcinoma (PDAC) represents Europe’s third cause of cancer-related death. Still, five-year survival rates are below 7% for locally advanced pancreatic cancer (LAPC) and 3% for metastatic cancer. Factors that contribute to this poor outcome are advanced disease, poor performance status at diagnosis, and limited therapeutic options and response. Irreversible electroporation (IRE) is a non-thermal ablation technique that uses short high-voltage electric pulses which induce cell apoptosis by creating nanopores in tumoural cell membranes. The main advantage over other thermal ablation techniques is that there is no “heat-sink effect” and thermal damage to vessels and ducts due to their elastin and collagen composition.

IRE has two typical indications. First, it can be performed in locally advanced pancreatic cancer (LAPC), considered non-resectable due to vascular encasement (stage III). It can also be used in surgical candidates with borderline tumours to increase the chance of R0 resection margin (Stage IIB). Tumour diameter should be less than 3-4 cm. After histological confirmation of pancreatic cancer, patients undergo neoadjuvant chemotherapy for at least three to four weeks. Stable tumour or volume decrease and low aggressive biology predict a better IRE response.

IRE can be performed through open surgery (or laparoscopic) with intraoperative US guidance or percutaneously under CT guidance (less frequently under US guidance). A high degree of expertise is needed for planning and performing the procedure. The most crucial step is placing multiple needles parallel to obtain full coverage of the lesion in this complex and delicate anatomic region. Two to six electrodes are inserted, and 100 pulses of 1500v/cm and 90µs are delivered between pairs of needles, synchronized with the “r” wave of the EKG to prevent cardiac arrhythmias. Needle pullback is frequently needed for overlapping ablations.

In the open approach, needles are normally placed caudo-cranial along the SMA axis (Fig.1). When the percutaneous technique is used, needles are placed normally using the CT axial plane (Fig.2). Transhepatic and transgastric routes are often used. Special care is taken to avoid puncture of the vessels and duodenum/bowel wall. Robotic stereotaxic needle placement aids needle positioning and shortens the procedure.

IRE is considered a high-risk intervention with complications of up to 36% and a mortality rate of 2%. The most severe complications are vessel thrombosis, bowel perforation, bleeding and severe pancreatitis. Tumour response is evaluated with CT. It may be challenging, as IRE tumour ablation may not resemble the typical necrosis imaging findings that occur with thermal ablation. Pseudotumoural growth can be seen for up to six weeks, secondary to swelling. Tumour response can be assessed after three months by combining signs of tumour growth, pathological enhancement, indirect signs of vascular/biliary compression, and tumour markers.

The main goal of IRE is to increase overall survival (OS) without affecting the quality of life of patients with LAPC. There are several studies that have demonstrated a median OS above 17 months, almost duplicating the current standard of care with chemotherapy alone. Besides local tumour ablation, evidence is emerging on IRE’s role in inducing systemic immunomodulation in a low immunogenic tumour like PDAC. IRE triggers an important antigen release and T cell activation that can be used combined with immunotherapy drugs as an added pathway to treat local and distant tumours. 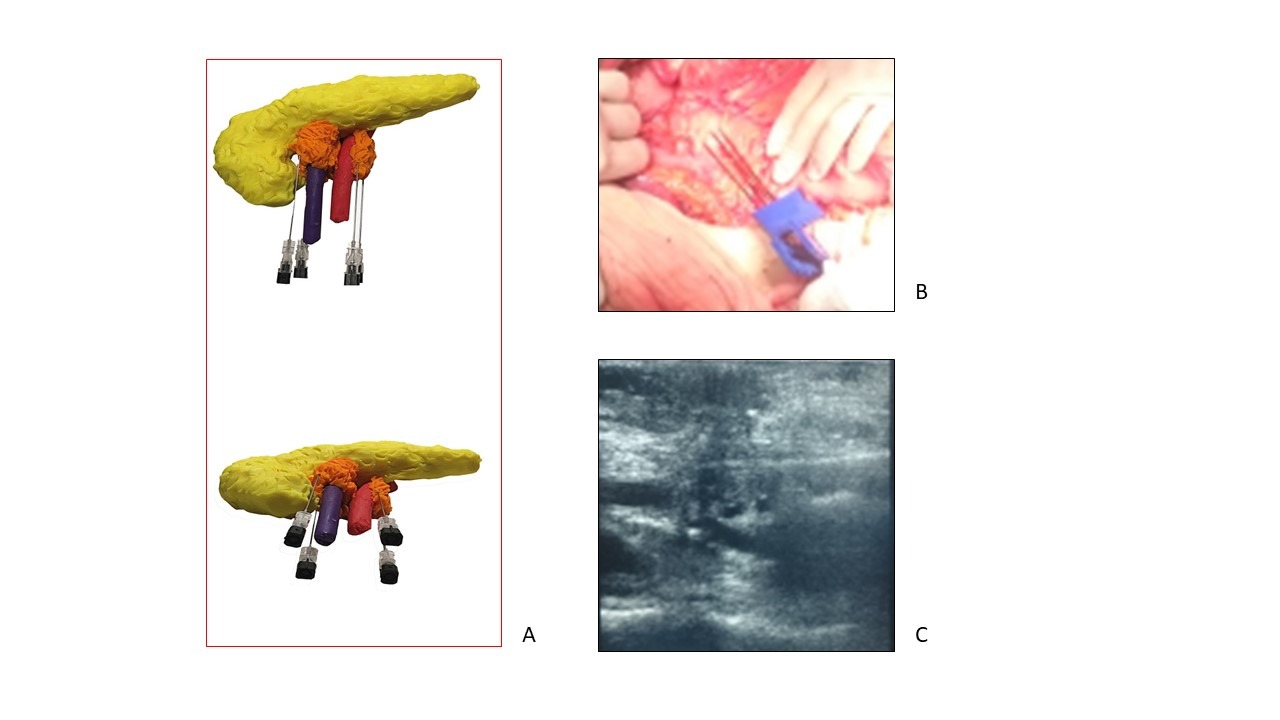 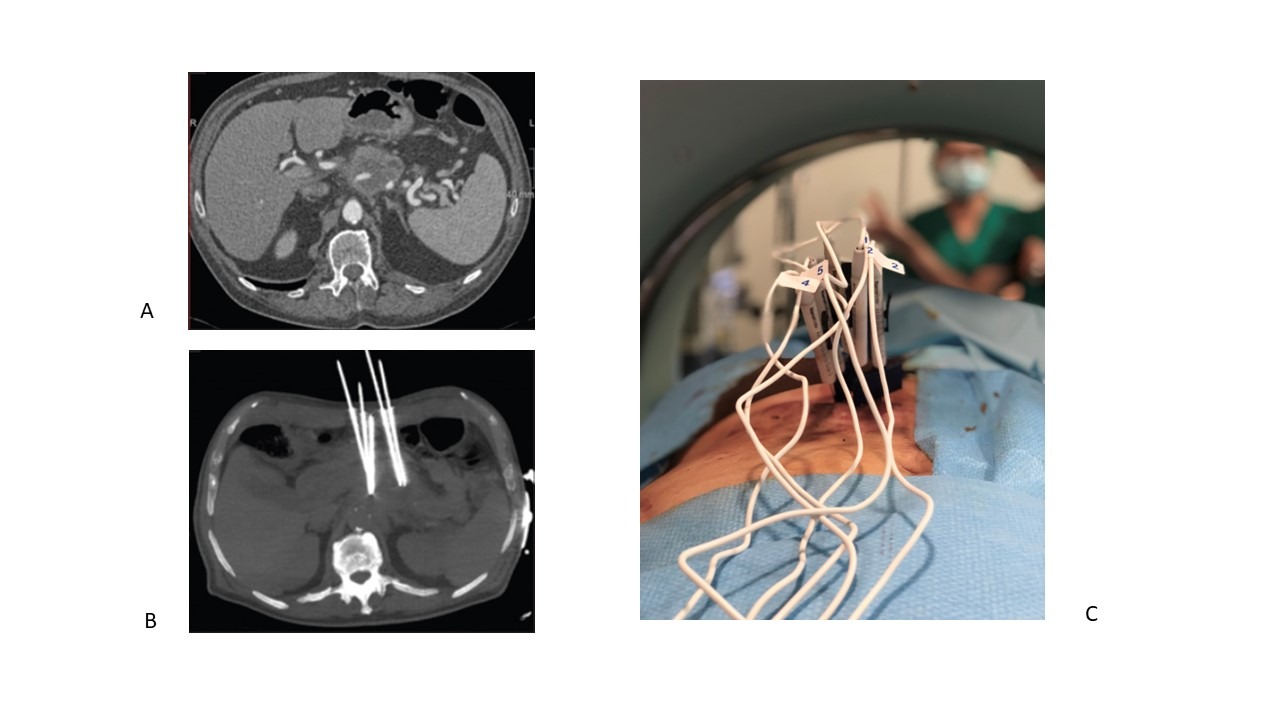 Figure 2. Percutaneous CT guided IRE. (a) LAPC with encasement of the celiac trunk. (b) Five parallel electrodes placed orthogonal to the patient. Pullback was needle to cover the lesion. Patient was under general anesthesia, and needle insertion is performed in apnea (c) Gantry view of electrodes, adequately fixed and taken care of CT table movements to prevent needle dislodgment. In addition to a strong interest in research, he is a regularly invited speaker at international conferences and a member of the CIRSE 2022 Scientific Programme Committee.