We spoke to Dr. de Graaf to learn more about his CIRSE 2022 lecture on endovascular treatment of upper limb DVT.

Watch his lecture in the session, “Upper limb DVT.”

Upper extremity deep vein thrombosis (UEDVT) accounts for approximately 5 to 10 percent of all cases of DVT with incidence increasing due to higher frequency of intravenous catheter use. UEDVT is usually categorized into primary (effort thrombosis or Paget-Schroetter disease) and secondary UEDVT, which is mainly caused by an intravenous catheter or cancer. The distinction between primary and secondary UEDVT is important to guide treatment strategies. Effort thrombosis or Paget-Schroetter syndrome usually results from physical exercise in patients with an underlying thoracic outlet obstruction at the intersection of the clavicle and first rib. In contrast to the underlying cause of iliofemoral DVT (most notably May-Thurner compression), this anatomic anomaly should not be treated with stenting because of the high rate of fractures and reocclusions. Pharmaco-mechanical thrombectomy should always be followed by surgical decompression to increase long-term patency [2]. Secondary UEDVT is more likely to be treated solely by catheter-directed strategies.

Cross-sectional imaging may not be as valuable to identify and categorise UEDVT as it is in iliofemoral DVT. Indwelling catheters or pacemaker leads, bony compression, and mediastinal movement all pose challenges for accurate interpretation. Moreover, real-time imaging during abduction and adduction of the involved extremity may be helpful to identify a position-dependent obstruction. Although hampered by suboptimal vein compression, Doppler ultrasonography is probably still the primary imaging modality to confirm a clinical suspicion of UEDVT. Antegrade angiography is performed only if endovascular treatment is considered. In these cases, intravascular ultrasound (IVUS) is always recommended. IVUS is extremely accurate in identifying underlying compressions, intraluminal webs or trabeculations, and residual thrombosis. While most experience with endovascular thrombus removal has been gained in iliofemoral DVT, similar considerations are valid for UEDVT.

Treatment aims to prevent recurrent DVT, post-thrombotic syndrome (PTS), and pulmonary emboli. One of the main goals is maximum thrombus removal, since residual thrombus is associated with recurrent DVT and PTS. Again, certain aspects of UEDVT challenge the endovascular approach, more so than in iliofemoral DVT. For example, strong curvatures at the level of the innominate vein make it difficult to physically reach and remove wall-adherent thrombus. Furthermore, the short length of the superior vena cava (SVC) makes stable filter placement virtually impossible. These aspects may help to determine which strategy and which clot-busting device to use. In general, thrombolytics should not be considered anymore for primary treatment. These are related to extended treatment duration and increased bleeding risks [3]. Modern (pharmaco-) mechanical devices use no or minimal thrombolytics which increases procedure safety.

Increasing procedure popularity and technical innovations have led to the introduction of multiple (pharmaco-) mechanical devices in the last decade. Many rely on an aspiration principle in which catheters up to 12 French macerate and remove thrombus fragments. With increasing catheter size and aspiration power, these systems bear the risk of increasing blood loss. Another disadvantage may be that old, more organised and wall-adherent clots are more difficult to remove by suction alone. In my experience, specifically with the aforementioned challenges of UEDVT in mind, a wall-to-wall full lumen mechanical thrombectomy system is preferable. As shown in the figure below, successful thrombectomy of a 10-day-old UEDVT was achieved after 2 passes with the ClotTriever (Inari Medical, Irvine, CA) system through basilic vein access. IVUS demonstrated no residual thrombosis and no underlying stenosis, thus stenting could be avoided. In some special cases, short stents may be used to overcome chronic lesions not responsive to PTA alone. However, as mentioned before, stenting should not be used at the costoclavicular joint.

After interventional thrombectomy, patients are usually placed on anticoagulation with direct oral anticoagulants for 6 months. After successful thrombectomy, compression stockings are not routinely recommended.

As for iliofemoral DVT, the treatment of UEDVT nowadays is essentially endovascular with some cases requiring a hybrid approach. Dedicated imaging techniques and tailored endovascular management are essential to optimise long-term outcome after thrombectomy for UEDVT. 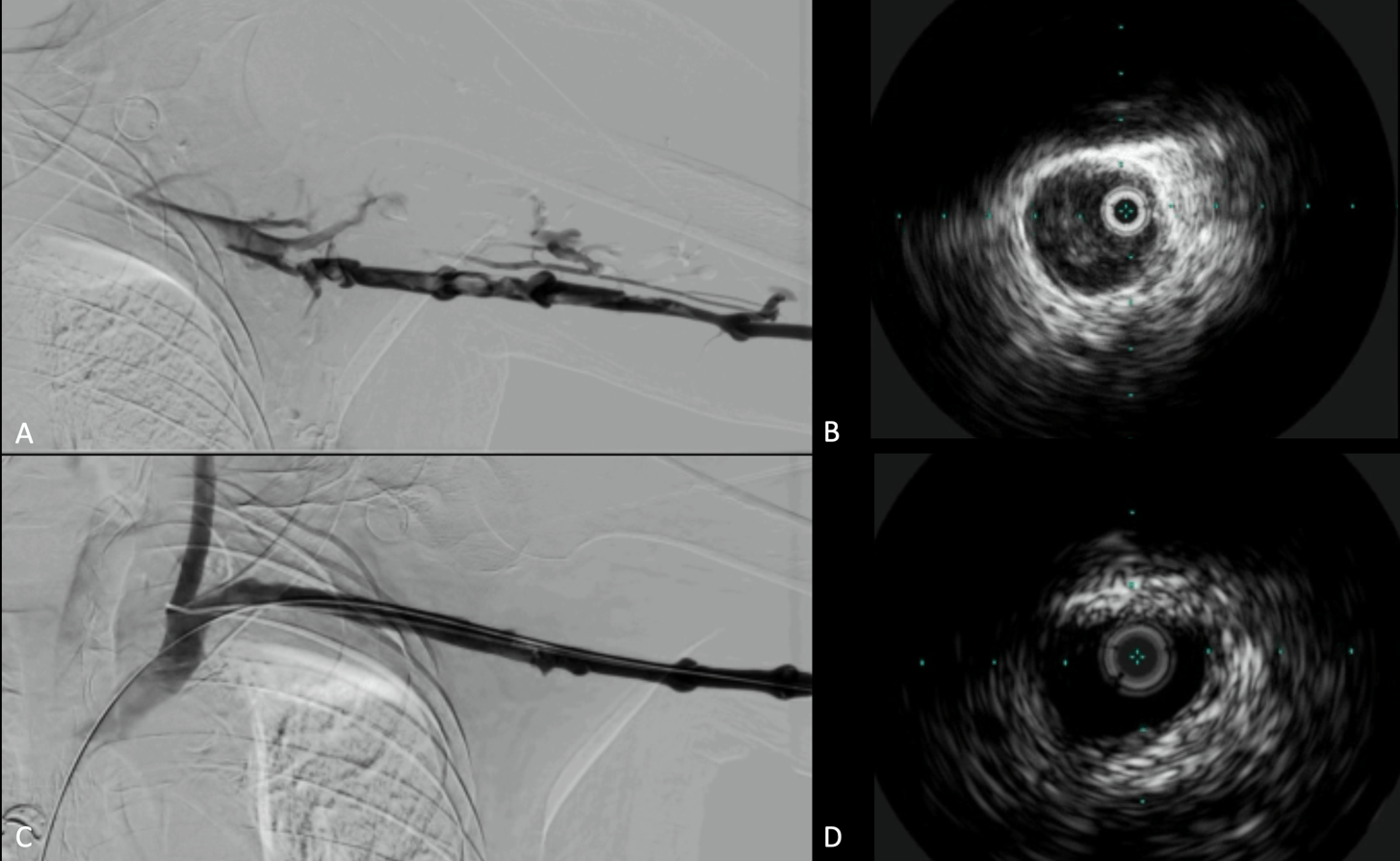 Figure 1: (A) UEDVT in a male patient with a swollen, painful left arm for 7 days (first signs were 3 days before). (B) IVUS showing a subclavian and innominate vein subacute thrombosis with limited wall thickening. (C) Angiography after two passes with the ClotTriever thrombectomy system shows brisk flow through the recanalized segments. (D) IVUS shows complete thrombus removal. Note the vein wall thickening, not to be confused with residual thrombosis. Dr. Rick de Graaf studied Medicine at the University of Maastricht, The Netherlands. He obtained his PhD at the Department of Surgery and Medical Microbiology of the Maastricht University Medical Centre, The Netherlands. He received his training in Radiology at the Maastricht University Medical Centre and obtained his board license in 2010.After clinical and research fellowships at renowned international institutes (Montefiore Medical Centre, dr. Frank Veith, NYC and Prof. Rene Chapot, Alfred Krupp Clinic, Essen), he focused on the minimal invasive treatment of (neuro-) vascular diseases.In 2010 he started the endovascular treatment of deep venous obstructions at the interventional Radiology department in Maastricht. This has lead to international collaboration with the University Hospital in Aachen and the Angiology department of the Arnsberg Clinic, Germany. His venous dedication is illustrated by the numerous invited lectures and visiting scholarships. With over 100 scientific publications and numerous presentations with strong focus on venous interventions he became a respected physician in the community.In 2018, Rick de Graaf acquired the position of Chief of Radiology, Interventional Radiology and Nuclear Medicine, and is Coordinating Director of Vascular Medicine at the Clinical Centre of Friedrichshafen, Germany. His main focus is on peripheral arterial and venous disease with a special interest in pelvic congestion syndrome.