We spoke to the organisers of the vertebral augmentation hands-on training Dr. Lohle and Dr. Wilhelm to find out what attendees could learn in the training at CIRSE 2022.

Every day interventional radiologists are approached by patients to resolve their vertebral pathologies. In recent years, considerable technological progress has been made as a consequence of the extraordinary outcomes of minimally invasive techniques, which have helped countless patients to achieve pain relief and avoid many of the complications associated with open surgery.

Every self-respecting interventional radiologist should know, understand, and if possible learn how to apply this vertebroplasty cementation technique for extra good care of his patients. It’s not difficult, you’ll learn it quickly during the Hands-On Workshop here at CIRSE 2022! Come to this workshop and we will teach you the simple skills in 15-30 minutes, so that you can successfully apply it in your own hospital.

This workshop gives an insight into the principles and techniques of vertebral augmentation and restoration. It consists of a short theoretical introduction followed by hands-on demonstration and participation by the attendants. All participants have the opportunity to practice needle placement, cement preparation and injection on plastic spine models under fluoroscopic guidance. 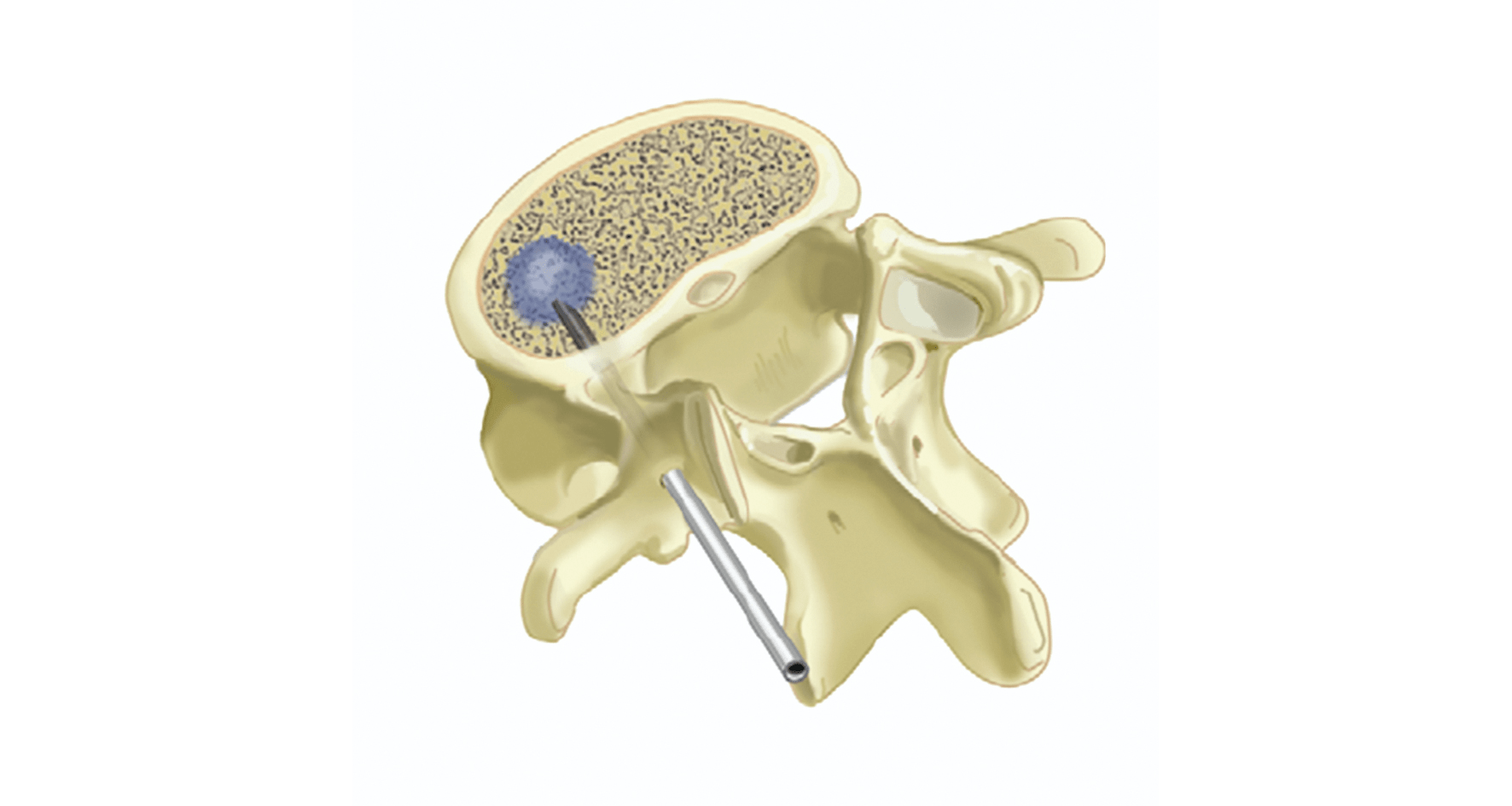 – To understand the basic principles of the percutaneous vertebral augmentation procedures

– To become familiar with the currently available techniques

– To practise needle placement on a spine model under fluoroscopic guidance

– To learn and practise cement preparation and delivery under fluoroscopic guidance

– To learn how to perform kyphoplasty

Percutaneous vertebroplasty (PV) is a non-vascular interventional radiology procedure for the treatment of painful vertebral fractures, most commonly due to vertebral collapse fractures caused by osteoporosis (woman>man), in Morbus Kahler, plasmocytoma, and lytic or blastic vertebral metastases.

PV is a procedure in which a special cement is injected into a fractured vertebral body with the goal of relieving spinal pain and restoring mobility of the patient. Percutaneous vertebral augmentation techniques are image-guided procedures used to consolidate vertebral compression fractures (VCFs), treat pain, and where possible, achieve vertebra height-restoration.  PV involves the injection of radio-opaque cement into a collapsed vertebra. It is effective for treating certain types of painful VCFs and some painful benign and malignant vertebral lesions that fail to respond to conservative therapies. 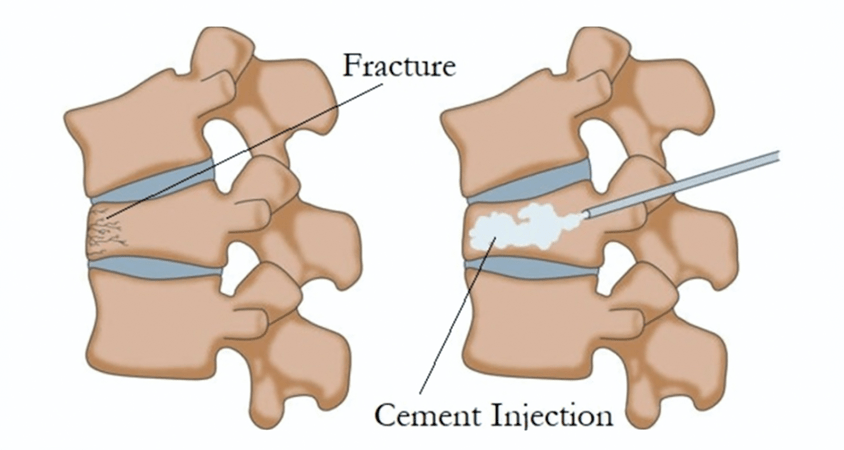 Kyphoplasty (KP), a form of cementation/vertebroplasty, attempts to restore vertebra body height by inflating high-pressure balloons prior to cement injection. 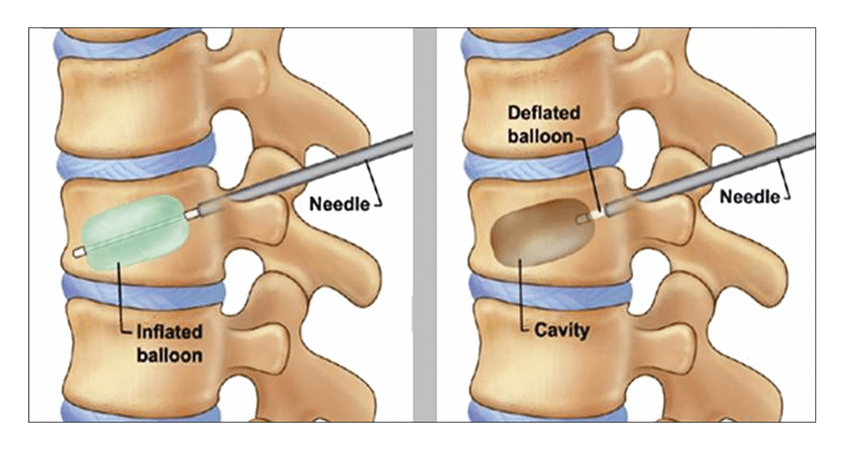 Vertebral body stenting and the other supplemental implant techniques include the placement of expandable scaffolds, inserted before the cement injection, in order to impede the secondary height-loss encountered with kyphoplasty after balloon deflation.

In addition to the classic cementation technique, we teach you to work with other devices such as Spine Jack, KIVA, other forms of kyphoplasty, vertebral augmentation and restoration.

Evidence with historical awareness of vertebroplasty through time

Vertebroplasty has been introduced by the French, thanks to the work of the interventional neuro-radiologist  (Professor Hervé Deramond) in early ’90s. The technique became worldwide accepted, because of many study reports with excellent clinical success rate ± 90%:  pain reduction, improvement of function, both on short and long term. Professional societies endorsed the use of PV.

However in 2009, Buchbinder and Kallmes sham RCT trials, demonstrated no short-term benefit of PV when compared with controls. VERTOS 4 sham RCT trial, could not demonstrate a significant difference in pain reduction after PV compared to sham. What VERTOS 4 did proof however, was:

Cementation provides an important advantage in the prevention of morbidity associated with loss of sagittal balance. A single wedge-shaped fracture at the thoracolumbar level can cause a 15-20° of spinal kyphosis. Spinal kyphosis induces sagittal imbalance of spine, induces increased risk of falling with increased risk of new vertebral compression fractures.

Thus, spinal kyphosis is a serious factor in:

The United States Medicare system came out with figures, which were analyzed showing that in patients with osteoporotic vertebral compression fractures the mortality risk was 4% higher between the years 2010-2014 (no more reimbursement by Health Insurance Companies in certain states of the US) compared to the period 2005-2009 during which the vertebroplasty procedure was reimbursement in the US. Cementation cohorts had a 7-19%  (vertebroplasty and kyphoplasty) lower 10yr mortality risk than the non-surgical management cohort.

An important publication came out in 2016 by William Clark; his VAPOUR sham randomized controlled trial demonstrated a sound and clear benefit of PV regarding pain relief when compared to sham intervention, with a significant difference in pain reduction after PV compared to sham. The positive findings of VAPOUR contrast with the three other former sham RCT trials. These conflicting results gave rise to discussions and controversies about PV worldwide !!

These differing outcomes from blinded RCTs have created controversies for the role of vertebroplasty in managing patients with acute painful osteoporotic VCFs. Cochrane review of PV failed to acknowledge any positive evidence for PV even with the VAPOUR trial. The recent American Society of Bone and Mineral Research taskforce report also based their finding on Cochrane review. Other analyses have drawn different conclusions, confirming the positive evidence for PV in patients with acute fractures and severe pain. The positive findings of VAPOUR may be partly explained by performing vertebroplasty much earlier with most patients (±80%) having fractures of 3 week duration or less, which is a key enrolment difference from the 3 former blinded RCTs (see figure below).

By far, most vertebroplasty studies focussed on early osteoporotic vertebral compression fractues (oVCFs), including the 4 blinded (sham) RCTs all 4 mainly focussing on (sub)acute oVCFs. There is only 1 study by Chen et al. focussing purely on chronic painful oVCFs 3 months or older.

In line with the study results from Chen et al. the recent VERTOS 5 trial (sham RCT on chronic oVCFs, including vertebral fracture 3 months or older) demonstrated:

– 2) significant difference in quality of life in favour of vertebroplasty at 12 months follow up compared to sham.

Given the results of several studies that found no added value in vertebroplasty, it is worth considering offering vertebroplasty particularly for the acute fracture before 3 weeks (conclusion VAPOUR trial) or for chronic fractures after 3 months (conclusion Chen’s trial and VERTOS 5 trial). The discussions will continue for the time being… to be continued.

Be that as it may, you are most welcome to join this Hands-On Workshop here at CIRSE 2022 and we will teach you the simple skills in 15-30 minutes, so that you can successfully apply this vertebroplasty procedure in your own hospital. Paul N.M. Lohle, MD PhD, completed his medical studies at the Groningen University in the Netherlands before starting his training in radiology & interventional radiology at the Westeinde Hospital in The Hague. Today, Paul works as an IR in a large community teaching hospital in Tilburg, in the south of the Netherlands.
For more than 15 years, Paul has been in charge of radiological teaching and training of the residents in his department, as well as the interns and IR fellows in his hospital. He is particularly skilled in embolisation (GI -, trauma -, pulmonary bleeders & fibroid-, adenomyosis-, prostate embolisation) including vascular interventions such as stroke treatment, AV-shunts, GI ischaemia and critical limb ischaemia. He is the principle investigator of the VERTOS 1,2,3,4,5 trials and the initiator of the QUESTA and SpleniQ trial. He is an active member of CIRSE and a CIRSE fellow.
Dr. Paul N.M. Lohle is often an invited speaker at international conferences, such as CIRSE and has authored or contributed to numerous CIRSE Academy courses, especially on UAE (fibroid and adenomyosis) and PV (percutaneous vertebroplasty) and is currently on the CIRSE 2022 Scientific Programme Committee. Prof. Kai Wilhelm is chairman of the Department of Radiology of the Johanniter GmbH Bonn, Germany. He did his training and continuing education in radiology and neuroradiology at the University hospital in Bonn including Internships at the Department of Radiology and Neuroradiology of the Geneva University Hospital in Switzerland. His main clinical and scientific interests are vascular and nonvascular interventions. He is an active member of the DeGIR, DRG, DGNR, ESR and CIRSE fellow and the recipient of several honors and awards. In 2002 he received a CIRSE Educational Grant and 2008 a CIRSE Fellowship Grant. Prof. Wilhelm is CVIR editorial board member in the field of musculoskeletal Interventions.